“I Want to Take You Higher”

“I Want to Take You Higher”

The need for real estate in markets where the marijuana industry has a presence has grown considerably with the legalization of marijuana for medical and recreational use. According to the IRR 2018 Marijuana Real Estate Report, space demand by marijuana industry tenants is “directly related to its sales and employment levels, and reveals where the market currently is and where it is likely to go in upcoming years.” One of the many consequences of the pent up demand for available cannabis space is that many landlords are either consciously or subconsciously channeling Woodstock rock legend Sly and the Family Stone, as they attempt to take the asking rent for their space to a higher level!

Cultivation and grow facilities are among the differing property types that require greater space and “major building components such as large drainage and plumbing systems for hydroponic irrigation, large heating, cooling, and ventilation systems as the lights utilized to grow cannabis indoors can generate significant levels of heat, with some HVAC installations having design specifications for 14 tons of cooling capacity in a 1,000-square foot space, while 2 to 3 tons of capacity would normally suffice for a standard office buildout in an industrial building. Concerns about odor management from local planning and zoning authorities also need to be addressed, usually with specialized negative pressure ventilation systems with external exhaust CO2 filters that prevent offensive odors from seeping into the surrounding neighborhood, all of which boost building costs significantly,” noted the IRR Marijuana Real Estate Report.

View Leasing REality’s Cheat Sheet on the Top 20+ Things to Know about the Cannabis Industry’s Potential Impact on Commercial Real Estate and Leasing and/or Video on the Cannabis Issues in Commercial Leasing (Part 1 of 2).

Living soil beds inside flower rooms at 710Labs in Colorado. 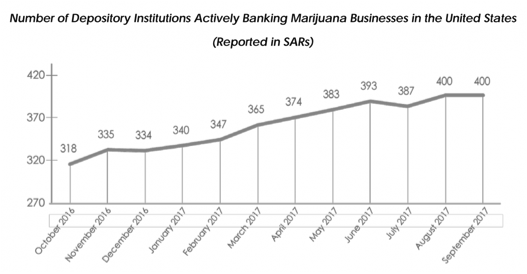 U.S. Attorney General Jeff Sessions decision in the rescinding of the Cole Memo from the Obama-era on January 4, 2018 has adversely affected cannabis related businesses, making it very difficult for these businesses to receive lending and services from institutional lenders. As of February 12, 2018, Eli McVey of Marijuana Business Daily advised that “combined, there are over 11,000 banks and credit unions operating throughout the United States, meaning less than 4% of U.S.-based financial institutions are serving marijuana businesses. Many banks that do provide services to cannabis companies prefer to keep quiet about it, however, making it especially difficult for marijuana businesses to find a financial services provider.” Notwithstanding the aforementioned financing and banking concerns inhibiting marijuana industry related businesses, compared to a year ago, the total amount of banks and credit unions servicing the industry has increased close to 30%.

In other cannabis related news:

On March 12, 2018, Paragon announced the opening on July 1, 2018 of the first crypto only co-working space for “companies, startups and freelancers within the cannabis industry.” Read more here.

MedMen, a cannabis company out of Los Angeles opened its doors on April 20, 2018 in the concrete jungle. According to the New York Post, the dispensary is currently one of three dispensaries allowed to operate in Manhattan and will do so out of a 10,000 SF space at 433 Fifth Avenue.

To go out on a high note, we leave you with the following words to ponder from former New York Knicks power forward in regards to marijuana:

“Enforcing marijuana laws costs the country about $3.6 billion a year, but it hasn’t stopped the use of marijuana, or decreased the availability of it.” – Al Harrington on The Players’ Tribune

View Leasing REality’s Cheat Sheet on the Top 20+ Things to Know about the Cannabis Industry’s Potential Impact on Commercial Real Estate and Leasing and/or Video on the Cannabis Issues in Commercial Leasing (Part 1 of 2).