Table of Contents
Next Chapter 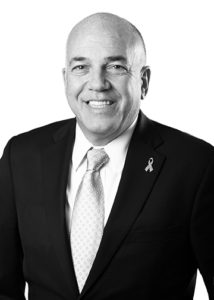 Hello everyone, my name is Larry Haber, and I have a confession to make. I am a reformed yet recovered developer who in my “prior” real estate life had over twenty years of experience in the ownership, management, development and repositioning of commercial and high-rise residential real estate properties. Furthermore, I am an attorney, CPA and most importantly, the adoring husband and father to my wife Joy and our four sons Sean, Ryan, Kyle and Conor. In my relatively “new” real estate life, I am the managing partner of the commercial real estate practice of Abrams Garfinkel Margolis Bergson, LLP (“AGMB”), a law firm with offices in Manhattan, Southern California and Long Island. I am proud to call my partners at AGMB my dear friends, and I am thankful for the platform and the long leash they have provided me to take my game to a new level both personally and professionally.

As to “why” I am “recovered,” one needs to look no further than the good, the bad and regrettably, what became the mostly ugly of what was once well over a four million square foot portfolio built largely on the relentless nature and creative out-of-the-box thinking of my former partners. When the time came to crawl out from the wreckage of the consequential abyss of late 2008 and 2009, it became clear to me that I needed to evolve and reinvent myself. Given that I had been on the ownership side for the better part of two decades, I essentially had no business or legal clients and no source of income other than living off of our savings. So, having to think and act quickly, in late 2008 I created a company called Colgate Real Estate Advisors. Building off of my “alleged” varied skill set, voluminous database of contacts, an ability to talk endlessly (and get by on little sleep) and the emergence of social media, I created a foundation for what I truly believed to be the next and most productive chapter in my life. Having sat on all sides of the commercial real estate negotiating table, Colgate itself was meant to be an affiliated yet independent team of real estate rock star professionals, utilizing our collective talents to provide our clients with sensible solutions in the then challenging times.

Between Thanksgiving and Christmas of 2008, I obsessively (with an unfulfilled thirst and hunger for knowledge) trolled what I then described to my wife as “Discovering America,” namely that of something once upon a time called Google Reader. Yes, although I found myself all by lonesome after having roughly 50 great employees to lean on, Google Reader and its ability to synthesize thousands of articles on real estate, social media and business into a compact format to suit my needs became my new “wing man.” I felt as if I had a team of hundreds of real estate professionals satisfying my previously unquenched hunger by feeding my belly and mind with thought provoking knowledge.

So with my wingman now in tow, my life and business experiences in hand, and a relentless, energetic, hard-working, passionate, fun-loving, optimistic and somewhat off-center disposition, all I had to come up with was an idea on how to get myself a million dollars of advertising for under $1,000. No worries at all I thought, given that I am from the school of turning “s-it into gold,” as I look at a glass that is three quarters empty as really being three quarters full. So I set out to discover what almost anyone else who thought like me would look to find … namely that of a really big pile of S-IT!

In late 2008 and early 2009, although Twitter and LinkedIn were becoming relevant, the overwhelming majority of businesses and professionals barely knew of their existence. As for Facebook, it was not yet acceptable or cool to promote your business on it, as I, like many, perceived Facebook as being strictly “personal” in nature. Instagram had not yet been created and as to YouTube – at least to me, and virtually anyone around 50 years of age – it was for posting funny videos. After I was able to get past putting myself out there for many to ultimately mock, enjoy and learn from, I decided to combine my self-proclaimed business acumen, leasing knowledge, ability to make a short story a long one and lastly, my passion for life, music and trivia, and create a YouTube channel. The primary content of my new venture would be free “educational how to real estate video blogs” (a/k/a VLOGS). Many, including myself, called these VLOGS my rants, raves and occasional inspirational thoughts regarding the new REality we all then faced. I often like to say that “there is reality, and there is perception,” and when it came to how my VLOGS were perceived by many, the myriad of superlatives (NOT!) and questions thrown my way included:

“What a train wreck, although I can’t seem to look away from them!”;
“So how much crack have you been smoking lately?”;
“Why are you advertising that the 70’s were good to you?” (To which I often replied: “Weren’t they for most people?”); and
“Are you trying to commit career suicide?” (To which I replied (with a smile): “I didn’t even know I had a career anymore.”)

Although I had a plan, I truly had no idea where it would take me. The hope, prayer and dream was that the VLOGS and the Colgate platform would act as an online video resume, allowing me to get back into the game by performing due diligence at little or no cost for those seeking to acquire distressed properties on the cheap. My plan was to play a part in the due diligence process for properties to be acquired, and if they were acquired, I would then receive a small portion of the syndicator’s “promote” subsequent to the time its investors received their preferred return. While still fighting the fog which accompanied my new lot in life, and with whatever “dry powder” I had remaining from my dwindling real estate interests earmarked to help pay for our three older boys soon entering college, I saw this plan as the only way I could accumulate a modest amount of savings with little to invest other than my skill set, work ethic and ability to string together a multitude of syllables.

A good portion of the leads and business initially generated from the VLOGS came from people I had known in my prior real estate life, and an even greater source of business came from those I never knew. Although what I am going to say might not be received as I intend, a large part of the initial success of the VLOGS was due to the fact that many people of my age and professional background didn’t possess the shameless audacity to deviate from the norm. Consequently, there are those who initially thought (and may still believe) that either I went off the deep end, or conversely, that the VLOGS had a bit of Doc Brown from Back to the Future genius to them. I will let you be the judge, jury and/or executioner as to the last point.

The goal of the VLOGS was to not only empower my then non-existent client base with the ability to make informed and knowledgeable decisions regarding their leases and/or real estate holdings, but also to provide an entertaining and off-center “how to” educational series of videos, outlines and handouts for tenants, landlords, brokers, accountants, attorneys, property management types and others touched by a commercial lease in some manner. As you will see in the pages that follow (and in my videos as well), my mission is to enlighten you with a few fun facts and lease negotiation strategies, while simultaneously providing you with a laugh or three along the way by hammering home the lesson of the moment with rock n’ roll, punk, new wave, hip-hop and pop culture learning mnemonics. My intent, by way of the materials and then Leasing REality’s 32-Hour and 48-Hour certificate programs containing 1,000+ questions, is to provide professionals, owners, tenants and those deciding what they want to be when they grow up, with an insider’s glimpse into the varied mindsets of the many parties involved in negotiating a lease, their hot buttons and how to potentially improve your negotiating skills when representing both your clients as well as yourself. Lastly, I am hopeful yet confident that during your forthcoming journey – through the tsunami of knowledge coming your way – that I’ll be able to show you the light from a plethora of vantage points at the bargaining table.